The Accademia Europea di Firenze is an International School of Italian Arts, Language and Culture. Founded in 2005 as an Italian language school for foreigners, over time our school has expanded and transformed to now offer students courses of Italian art and culture, music and dance. AEF also offers Certificate Programs in Voice & Opera, Drawing & Painting, Dance, and Italian Language & Culture, as well as Study Abroad Programs in collaboration with prestigious American Universities, intensive Summer and Winter Programs and Joint Academic Programs developed with universities from all over the world. Deeply rooted in Italian history and culture, but compliant with European academic standards, our school is enhanced by our experiential learning approach and the top quality of our faculty, which contribute to the creation of an international community in the city of Renaissance and universal beauty. Are you ready to be part of it? 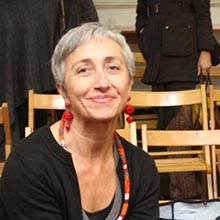 Brunella Baldi begins the study of dance in Florence. Later on, she moves to France, and graduates in Paris, at the Centre International de la Danse and the Fédération Française de Danse, where she studied with numerous French choreographers of "Nouvelle Danse" (J. Gaudin, Dizien B., C. Bastin, Gallotta etc.) as well as with Americans (Aaron Osborne, Risa Steimberg, Douglas Dunn). The most significant meeting in her formation and career as a choreographer is with Dorothy Madden. She begins working as a choreographer in 1985, and since her return to Italy she has dedicated herself to the teaching of contemporary dance. She founded the group BALDANZA. In 2008, she began working as an illustrator and in 2015 opened the space-gallery-workshop called Cartavetra.