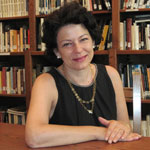 Tina Fallani graduated in Film Editing, Video and Film at the Film School, Regione Lombardia RAI and a degree in Screenplay with Tonino Guerra at Evviva Il Cinema, Republic of San Marino. She studied Law at the University of Florence and has taught regularly in numerous American universities since 1992. She has collaborated on many important film productions, including The Secret Garden (Agnieszka Holland); Dracula, The Godfather Trilogy and Godfather III (Francis Ford Coppola); Henry and June and The Unbearable Lightness of Being (Phil Kaufman); The Neon Empire (Larry Penn); Mountains of the Moon (Bob Rafelson); Dead Poets Society (Peter Weir); Willow (George Lucas); Of Men and Angels (William Farley). She was a jury member at the San Francisco International Film Festival and coordinator of the Florence Film Festival.