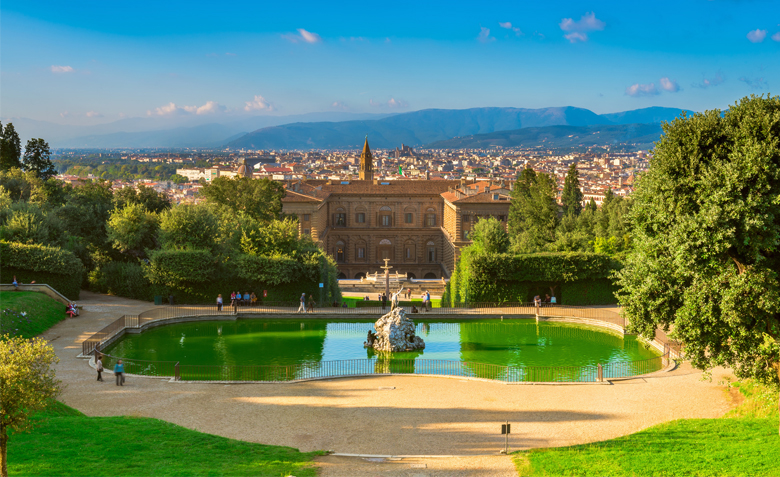 "Florence has been known for centuries for its villas on the low hills which surround the city” reads the famous "Italian Villas and Gardens", a small but precise passage written in the early twentieth century by Edith Wharton. Precisely right: studying Italian in Florence allows you not only to have the good fortune to live in a city of immortal beauty, but also offers numerous opportunities to explore the heart of Tuscany.

A few kilometers from the city, you are in fact thrown into an enchanting landscape where it is easy to indulge in lyricism, inspired by the Genius Loci that has been populating these views for hundreds of years. A phrasing of soft slopes, punctuated by villas that fit perfectly, with their gardens and their residences, minutely described by Wharton. The Florentine villas deserve a separate chapter in the 1905 volume. Among the author's favorites, is undoubtedly Villa Gamberaia, an elegant residence around Settignano, near Florence.

Tireless traveler, the author of "The Age of Innocence" is one of the innumerable intellectuals to be literally raptured by the charm of Tuscany. Fascination that can be traced in some of her works, for example in the "Italian backgrounds", a volume that crosses the whole peninsula, in search for the most harmonious places of the Old Country. An open antithesis compared to the majestic scenery of the Grand Tour, a practice that a few decades earlier predicted what would become a few centuries later, instead, mass tourism.

That's not all: Wharton does not limit herself to reporting pedestrian itineraries of travel, just like simple logbooks. Not merely a poet and author of novels, then, but also a pioneer of interior and garden design: her treatise is in some ways technical, celebrating the harmony between landscape and architecture. An incredibly modern vision that has anticipated disciplines such as sustainable design, or even the organic architecture of the brilliant Frank Lloyd Wright in which anthropic intervention and ecosystem are integrated plastically.

Elaborated by the fine artistic sensitivity of the New York author, the first woman in history to win a Pulitzer Prize in 1921, references to the harmony of places abound. Memorable in the "Italian Scenarios", a poetic suggestion that describes the journey from San Gimignano to Castelfiorentino: "the hills, so definitely etched at midday, at sunset so softly modelled, had melted into a silver sea of which the farthest waves were indistinguishably merged in billows of luminous mist. Only the near foreground retained its precision of outline, and that too had assumed an air of unreality. Fields, hedges and cypresses were tipped with an aureate brightness which recalled the golden ripples running over the grass in the foreground of Botticelli’s Birth of Venus".