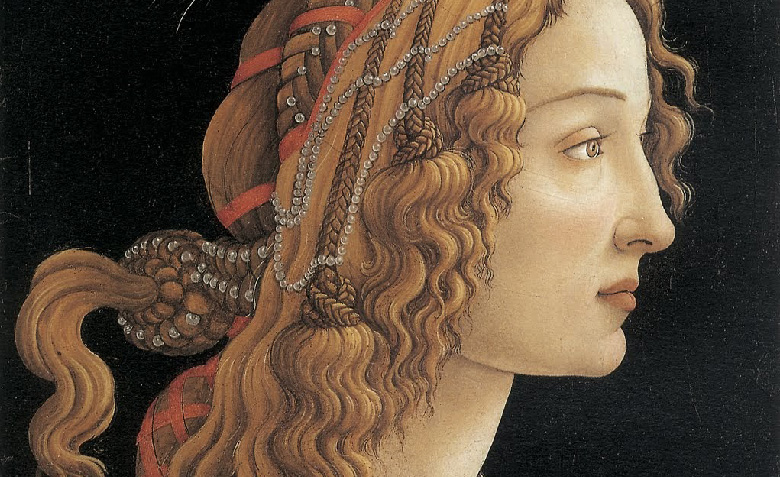 Florence is one of the world capitals of art, a majestic open-air museum, immersed in beauty. Speaking of beauty, it comes natural to think of the extraordinary Venus of Botticelli, originally painted for the Medici Villa of Castello, and currently kept in the Uffizi Galleries.

Representation par excellence of the Renaissance aesthetic ideal, legend has it that the goddess painted by the Florentine painter is, in fact, a noblewoman of fifteenth-century Florence, whose beauty would have inspired not only Botticelli, but also many other artists, poets and painters.

The model of the "Birth of Venus" would in fact be Simonetta Cattaneo Vespucci, whose extraordinary beauty and premature death helped to turn her into a legend.

Exponent of the Cattaneo, a noble Genoese family of very ancient origins, the "beautiful Simonetta" was given in marriage to Marco Vespucci, rich cousin of the more known Amerigo, the navigator who gave the name to the New Continent. Her grace, immortalized in Cleopatra's clothes in a famous portrait by Piero di Cosimo, made her a true icon, so much so that even Giuliano de 'Medici was in rapture by her.

In fact, Giuliano distinguished himself in the famous tournament described in the poem "The rooms for the carousel" by Poliziano, to win a portrait of the girl made by the same Botticelli who, given her unrivaled beauty, had designated her precisely as "nonpareil".

Even Pulci and Lorenzo the Magnificent would not have remained indifferent to the charm of the young woman to whom they would have dedicated verses and sonnets.

That of being "unmatched" was, however, a very short existence: Simonetta died at just twenty-three, consumed by tuberculosis and even her death is accompanied by legends that feed the myth. It is said that, before the burial in the church of San Salvatore in Ognissanti, which preserves the remains of the most illustrious members of the Vespucci family, Simonetta's coffin was left open to allow anyone there to pay homage to admire her features.

What about you? Did you know the story of the beautiful Simonetta?