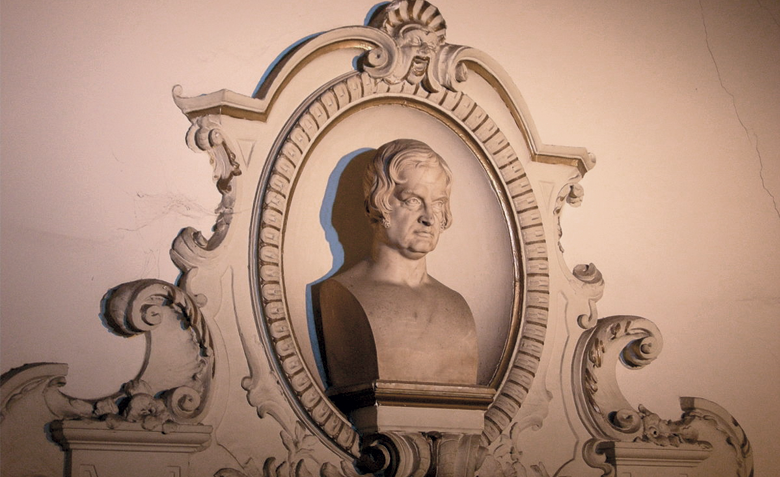 Born in San Giuliano Terme in 1782, Giovanni Battista Niccolini, a young prodigy, merely adolescent, began studying law at the University of Pisa and, at the same time, met Giovanni Fantoni and Ugo Foscolo, the famous poet of the "Sepolcri". It is with the latter that he established a deep bond of friendship, which accompanied him throughout his life. It will be precisely because of this friendship that Foscolo in 1803 dedicates to him the "Poems" and the translation of "Chioma di Berenice".

A convinced promoter of the independence of Italy, he composed, during his lifetime, numerous tragedies with a historical-patriotic theme. In 1807, he was named Professor of History and Mythology at the Academy of Design Arts in Florence - the first art academy in the world, established in Florence, by Lorenzo the Magnificent - for which, during that time, he designed the academic curriculum. Niccolini always remained, inextricably linked to the Academy, which in 1859 awarded him the title of Honorary Life President.

The long-suffering Tuscan Thespian died in Florence in September 1861, a few months after he saw his patriotic dream fulfilled, culminating in the proclamation of the Kingdom of Italy.

Like many other great artists of the past, his remains are preserved in the Santa Croce monument, between Michelangelo, Galileo, Machiavelli and Foscolo, his life-long friend.
On the Memorial in his name, stands a huge marble sculpture, the Liberty of Poetry. Sculpted by Pio Fedi, it is the most probable inspiration of Bartholdi’s much more famous Statue of Liberty, which dominates over New York.