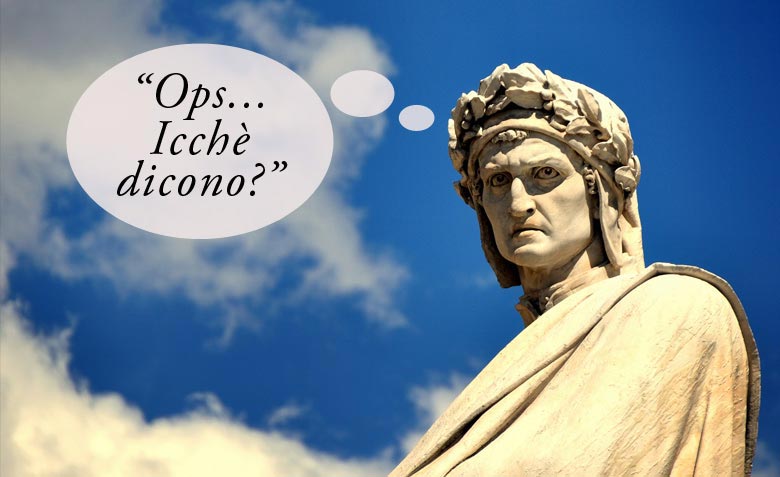 Florence is the cradle of the Renaissance, the city of art, the homeland of Dante, the language of a true Italian, but did you know that the Florentine dialect has terms and figures of speech that are very different from Italian? Since our Accademia is based in this beautiful city, we decided to reveal these Florentine ways of speaking to you that will put you in direct contact and allow you to integrate even more with the culture and with all the people who live here.
"Grullo" The ultimate Florentine word. It means a person who is silly, un-clever, but also a bit incautious. "Oh grullo! Icchè tuffai, un tu vedi che piove?!!” (Dummy, what are you doing, can’t you see it’s raining?!!) This could be a typical Florentine phrase with which to communicate a strange or unusual action. In short, if they say it to you jokingly, don’t take it to heart; if you hear it said to you often, it’s not a good sign!

“Ma icchè tu dici!” The phrase you will hear most often once you arrive in the city. It means, "What are you saying?" and is used both as a question and as an exclamation, sometimes as a filler word.

"Bischero" This word literally means a person who is not very well educated or not very clever, who often uses inappropriate behavior. It is mostly used in a playful way. "Ho fatto una bischerata" means to have done something without thinking, resulting in failure.

"Trombaio" In Florence this word refers to a plumber. If you have to contact your landlord over a broken pipe, you will know whom to turn to.

“Arrivare dopo i fochi di San Giovanni” In Florence, in June, the patron saint San Giovanni Battista is celebrated. This festival in ancient times included tournaments, a horse race (remembered by Dante and Boccaccio) and a fair. At the end, there were fires, on which men and animals were blown up according to the tradition of blessing `for ignem'. "Arriving after the fires are out,” means arriving after all is said and done; too late.

“Senza lilleri, un si lallera!” An expression that you will often hear in conversations between Florentines; it means that without money you can’t do anything.
So, did you know any of them?!