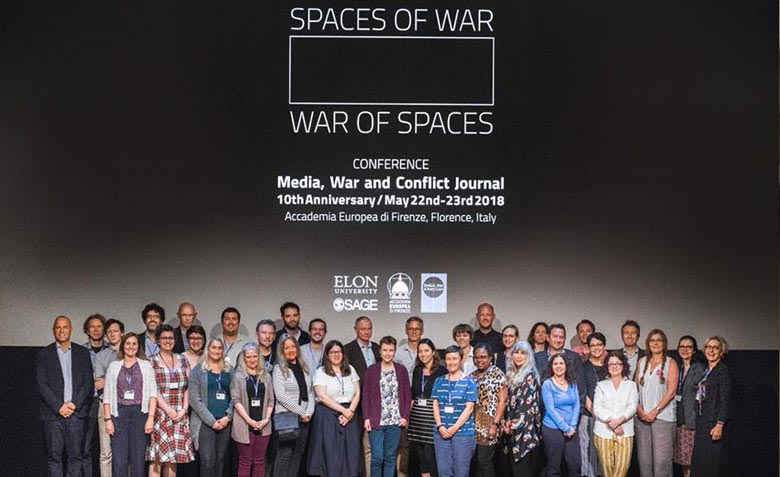 Academics, scholars, deans and journalists from over 50 universities from all over the world met this past May 22nd and 23rd in Florence for "Spaces of war, war of spaces": two days of debate and discussions with top experts in political science, journalism and strategic communication to analyze the relationship between war and information. The conference, organized by Elon University in collaboration with Accademia Europea di Firenze, Italian excellence in the formative training of international students, took place between the AEF Headquarters at Palazzo Niccolini and the Cinema Teatro La Compagnia.

A real and true conference-event, between round tables, moments of discussion, and film screenings with important names in the sector, to celebrate the tenth anniversary of "War, media and conflict", the first scientific journal in the world dedicated to the study of the relationship between media and conflicts, published by SAGE, Californian publishing house founded by Sara Miller McCune, awarded in Career achievement in 2018 at London Book Fair.

A rich and varied program to explore new real and virtual battlefields: from using social media to recruit ISIS foreign fighters, to the role of information in the Israeli-Palestinian conflict; from the self-representation of Russia in the occupation of Crimea, to the patriotism of Ukrainian hackers; from the "selfies of terror" that feed the myth of jihad, to the story through images on the Syrian front; from the representation of gender violence in the abduction of Boko Harram to war narrative, including films, documentaries, mass media and video games. And also, the impact of fake news, the strategic role of communication in the Arab Spring, the "liquid" war, the new surveillance technologies and the NATO-Asia-Pacific media report.

Two-day guest of honor, Dean of Political Science at Elon University in North Carolina, Laura Roselle, co-editor of "War, Media and Conflict" and among the most respected academics of the branch: "information on conflicts in the world is no longer focused on a single theme, but on the lives of people” - says Roselle. “One of the challenges is to change the way we look at information: from a very vertical way to something more horizontal. We have many more voices, which can cause chaos, but it is also an opportunity because many people who in the past had no voice now have it, and this changes the context, including our notions of war and conflict."

"Roselle strongly wanted the journal's decennial to be celebrated in Florence”, says Elisabetta Santanni, Director of Marketing and International Relations of AEF, “it is an important message and an unprecedented opportunity for the city, at the center of a worldwide network of excellence.”

Among the absolute protagonists of the event, Professor Andrew Hoskins, co-founder of "War, media and conflict”, and the world's leading expert on digital society, media, global security and privacy. He was entrusted with the Key-not speech, "War in the gray zone", a focus on the crisis of communication in the post-truth era, to analyze the so-called "grey area", the area of ambiguity in which the story of war on Facebook, Twitter, YouTube and Whatsapp is fragmented due to the multiplicity and unreliability of the sources.

To close the event, the film screening of the award-winning "Faces we lost", with the presence of the Director and academic, Piotr Cieplak (University of Sussex). The documentary tells the story of the 1994 genocide in Rwanda, in which with one million victims in just over three months, is one of the bloodiest chapters in African history, through the photos of the lost relatives, protected by the nine protagonists who escaped the massacre.