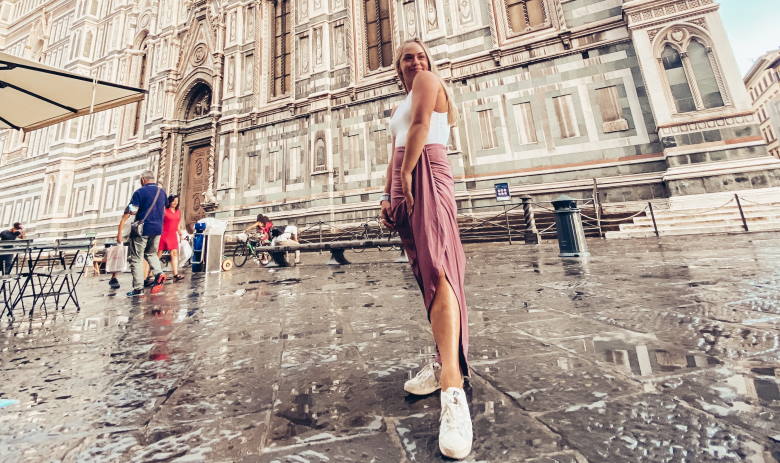 August 19, there were 98 students from Elon on their way to Florence and would be spending the fall semester there. I was so excited to spend a semester in Florence and experience Italy in a way not everyone can. My mind was running a mile a minute with my list of things I wanted to do and see during my study abroad. I had been to Florence before in high school, and we crammed everything into one week, but this was going to be a test of independence and self-discipline, more so than at Elon. This was going to be different.

After a few days of being in my new home, I was unsure of how to act. I had never lived in a city before and was getting accustomed to everything before classes started. My stress was beginning to creep in, but I suppressed it by going out and forcing myself to have a good time like everyone else was instead of dealing with what I was feeling.
When classes started, I was not going out during the week like my classmates were. I was spending so much time on social media, seeing posts about everyone’s crazy fun nights. I could not drag myself from my apartment and do the same. I kept beating myself up for being homesick while everyone was thriving and I was at home instead of making friends. I hated the way I was feeling. It was not like me. I am very outgoing and thrive on making others happy. How was I supposed to do any of that when I was not happy myself?
I called my mom, who was 4,000 miles away and six hours behind, multiple times a day. I needed someone who I could talk to here in Florence and help me get back on my feet. Luckily, I realized all of this sooner rather than later and got in touch with the psychologist that AEF worked with.
After the first month, I was feeling more alive and ready to take on this study abroad experience. Days felt like less of a force after having someone who would listen to my anxious thoughts and feelings. I talked to other students in my classes and those I saw in coffee shops and they were beginning to realize they missed home too. They also had the fear of missing out on everything going on back at home. Everyone was going through their internal battles at their own pace. It might have taken me longer to realize all of this if I had not reached out to AEF staff. I could not let this consume me and be the reason I missed out on this once-in-a-lifetime experience. There is so much personal growth that studying abroad allows students to make and learn from. The biggest thing to remember is that being thrown into the lifestyle is overwhelming, but you are not in it alone. Other students are going through the same thing even though they may not show it.
Some things that helped me were journaling, experiencing Florence in my free time, and limiting my time on social media. Reading and walking around the city were my favorite things to do that helped keep me and my mind busy.
Your feelings are valid and you are allowed to be homesick. You are entitled to experience the terms and conditions that come with living abroad.