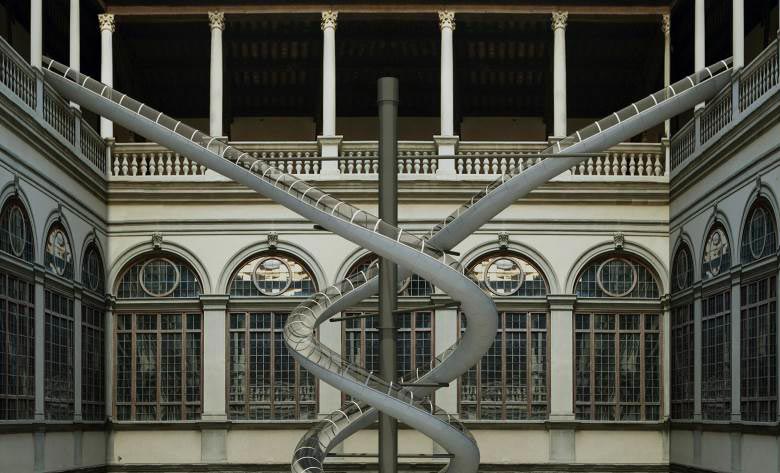 Florence is one of the international capitals of culture and art: known throughout the world as the "cradle of the Renaissance", it encloses in its’ streets, its’ squares, its’ Lungarni and within its historic buildings, an indescribable beauty. However, don’t make the mistake of writing it off amongst the simple cities of art: extraordinary places, but definitely anchored to the past. It would be a cliché. In recent years, in fact, the Tuscan capital is experiencing a period of great cultural and creative ferment, a sort of "contemporary Renaissance" through which it can revisit tradition, fusing it with the avant-garde and overturning any paradigms.

The installation by Carsten Höller that combines art and neuroscience in the courtyard of Palazzo Strozzi, was inaugurated by The Florence Experiment just over two weeks ago, through two giant slides that allow visitors to slide down 20 meters. It was also, Palazzo Strozzi, which is preparing to welcome the undisputed queen of performing arts, the brilliant Marina Abramović, who hosted the controversial works of the famous Chinese designer and activist Ai Weiwei. For the occasion of the retrospective dedicated to him, he in fact, placed a series of rubber boats on the mullioned windows of the first floor of the building: a provocative work of impact that literally shocked anyone who was facing the imposing façade of this Renaissance jewel.

And the incredible extraordinary nature of all these works lies in the fact that they manage to graft into the space that surrounds them, that they can rethink it, completing it and creating a new perception, without ever denying the great tradition from which they come, but rather enhancing it..

Just think of "Pluto and Proserpina", Jeff Koons’ golden statue, whose metal surface reflected the works surrounding it, creating a vibrant artistic short circuit in the wonderful Piazza della Signoria. Or again, the giant "Big Clay # 4", a gigantic metal sculpture created by Urs Fischer and placed in front of Palazzo Vecchio: a tribute to the primordial form. Or the projections of the video art master Bill Viola alongside the masterpieces of Masolino and Pontormo that inspired them, in a sort of metafictional dialogue between past and future.

Florence is alive, vital and proves not only to be in step with the times, but also to precede them. Whether you are just passing through or here to stay for a while, every corner of this city has an ancient story to tell. And many new ones to welcome!