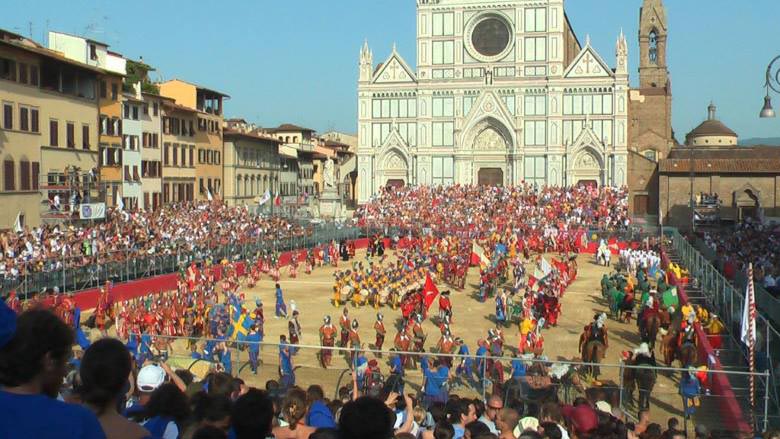 Living in Florence means getting lost every day in its beauty and its history. All the squares, the gardens, the riversides, even the most hidden corners of the city, have a story to tell. And among the picturesque traditions that animate the Florentine summer, that of “Calcio Storico” is undoubtedly one of the most original and one of the most heartfelt. In fact, true and proper fan clubs meet every year in Piazza Santa Croce and, under the stern gaze of the statue of Dante, encourage and loudly cheer on their favorite team. But, let's discover the origins of this sport "in costume”.

“Calcio Storico”, also known as "football in livery" due to the athletes’ flashy playing uniforms, is one of the most followed events and real Florentines never miss a match. It is a team game whose colors symbolize the neighborhoods of the Tuscan capital: the Bianchi Santo Spirito, the Rossi Santa Maria Novella, the Verdi San Giovanni and the Azzurri Santa Croce.

The four teams compete every year in a tournament during the month of June: two semi-finals and one final, which is played on June 24th, the day of the city's patron saint celebration, San Giovanni.

This sport has very ancient origins and is considered by many to be the ancestor of football, even if in fundamentals it is very similar to rugby. It is thought that football descends from "Sferomachia", a ball game already played by the Greeks and imported into the peninsula by the Romans under the name "Harpastum". This sport has never ceased to thrill, even with the passing of the centuries: in the Middle Ages in Florence it was customary to play in the street and in the city squares. Yet there is a particular reason why the Florentines proudly claim the paternity of this sport and celebrate this tradition every year.

In 1530, during the siege of Emperor Charles V to overthrow the Republic, in fact, 54 Florentine nobles went down to Piazza Santa Croce and started playing soccer, as a sign of superiority towards the Spanish invader. Five centuries later, this gesture is proudly remembered not only with the usual summer tournament, but also with a historical parade and a costume match on February 17th of each year, the date on which this anniversary is celebrated.

What about you- have you chosen who to cheer for this year?