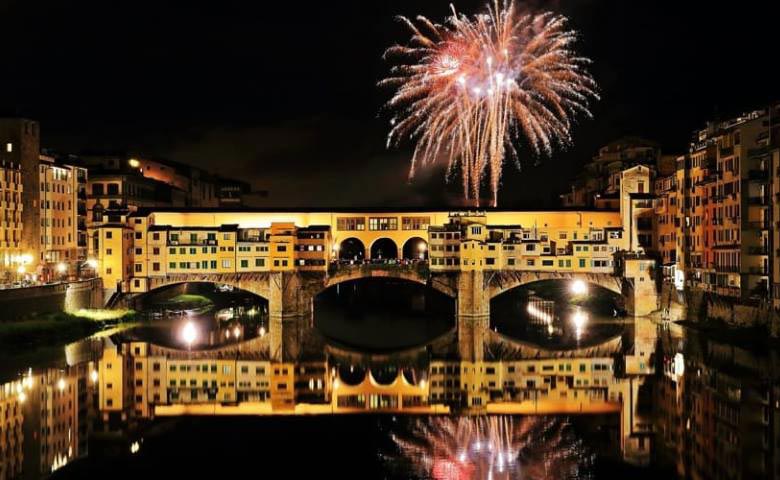 Florence in summer is even more extraordinary, but there is a special night that illuminates it and makes it shine in all its beauty! That is June 24th, the day when St. John, or San Giovanni, the patron saint of the city, is celebrated. An entire day of festivities, between historical parades and traditional games, which culminates with "fochi", an incredible fireworks display from Piazzale Michelangelo. The figure of St. John the Baptist, the patron saint of Florence, during the Middle Ages embodied "moral rectitude and political correctness". The Baptist was a saint of high symbolic value for the city, to such an extent that his effigy was embossed on the florin, the official Florentine coin.

His birth, celebrated on June 24th, was originally celebrated by Florentine nobility and noblemen who donated tapers and candles. Over the centuries, the celebration grew into an event that involved the entire city.

Currently, the celebrations begin with a procession led with the official Banner, from Palazzo Vecchio to the Baptistery. From here, the city authorities and the Archbishop arrive at the Cathedral for a solemn mass.

In the afternoon, the long-awaited final match of the Calcio Storico is played: that of “football in livery”, among all the recurrences of the Florentine summer is undoubtedly one of the most original and among the most heartfelt. In fact, fans meet every year in Piazza Santa Croce and, under the stern gaze of the statue of Dante, encourage and loudly cheer on their favorite team. The Bianchi of Santo Spirito, the Rossi of Santa Maria Novella, the Verdi of San Giovanni and the Azzurri di Santa Croce compete in two matches in the first weekends of the month. After a costume procession that enflames the fan clubs, the two final teams then play off during the afternoon of June 24th.

The day ends with the spectacular fireworks show, the "fochi", as the Florentine’s say! The cannon shot at 10 pm, marks the beginning of an unmatched firework display: launched from Piazzale Michelangelo, the fires are visible from every point of the city and illuminate the riversides with sparkling polychromies, making them even more magical. From the breathtaking view of the Fiesole hills to the crowded riverside banks, there is no doubt: wherever in Florence you may spend it, it will be an incredible night!