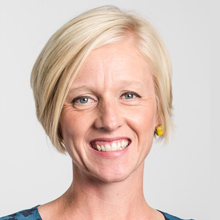 Annique Kiel is the executive director of global engagement and international programs at Drake University. As the senior international officer, Kiel oversees the strategy for global engagement for the institution, and directs the international programs department. Over the course of her career in international education, she has presented at several regional, national, and international conferences on topics ranging from strategic international partnerships to study abroad program design, and regularly conducts workshops on intercultural competency. Kiel has developed a specialization in programming related to sub-Saharan Africa, and most recently successfully led efforts to bring the prestigious Mandela Washington Fellowship for Young African Leaders to Drake University and Des Moines in 2016, 2017, 2018, and 2019. She is actively engaged in the Drake campus community, serving on the Strategic Diversity Action Team and the Women in Leadership Committee, among others. She is also active in the field of international education outside of her role at Drake, serving on national and international boards, as well as on a local board of directors for CultureALL, a Des Moines-based non-profit organization providing cultural programming. Kiel received her B.A. in International Studies and French from Central College (IA) and her M.A. in French Studies from the University of Wisconsin-Madison, where she was named an Honorary Fellow in 2012.